Welcome to our
ONLINE STORE - SPECIALS

Great for home, Christian and home school study, small groups, Sunday School, church libraries and anyone just wanting a collection of ALL of Eric's DVDs, his most current Books, plus others and an assortment of his teaching CDs. 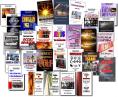 Give a Gift to the Ministry

Present and Past SPECIALS

Creation vs Evolution Package (2012) SOLD OUT

Bible Prophecy and the Occult (July/August, 2012)

The Battle Cry of Praise Video Package SOLD OUT

The Proof and the Power of the Resurrection

Before you check out, would you please consider making a special gift to the Ministry? We are 100% donor supported. Please click here for more information.

View all items in our store by visiting our Main Bookstore

*Return & Shipping Policy*
We will gladly replace any defective item "title for title" for the period of one year from date of purchase.
However, no refunds will be issued due to the nature of information imparted therein.
Please allow up to 2-4 weeks for delivery.
Thank you for your order!