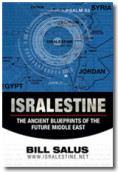 Isralestine:
The Ancient Blueprints Of The Future Middle East
DVD 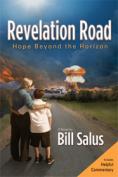 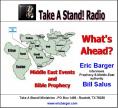 Some have wondered what the word Isralestine identifies. At first glance it seems to suggest the coming of a 2-State peace partnership between Israelis and Palestinians. On the flip side it has a haunting hint of the Nazi holocaust.

"Isralestine" successfully merges the Jewish State of Israel into the loosely defined territory formerly called Palestine. This one word construct introduces God's future plan for the Middle East as predicted by the ancient Hebrew prophets.

Isralestine foretells the coming of a Greater Israel in successive stages resulting from the apocalyptic Israeli war prophecies described in Psalm 83, Ezekiel 38, and Armageddon.

In a nutshell, this one word encapsulates God's intent to insure the eternal existence of Israel in accordance with the unconditional covenantal promises He gave to Abraham, Isaac, and Jacob.

Isralestine picks up where the failed political efforts to create peace in the Middle East leave off. The world cries; "heaven forbid a Mideast war from coming," but heaven foreknows it's already headed our way!

A one-of-a-kind reading experience. Enjoy a thrilling novel and a non-fiction commentary ripped from today's headlines and the prophecies of the Bible. The modern world has been thrust into a time of chaos and uncertainty. Iran's nuclear threat; the Arab Spring; the toppling of long-ruling despots and the power vacuum left in the wake; Israel's security under attack from hostile powers abroad and wavering support here at home.

Modern dangers? Yes, but calamities foretold in the Bible thousands of years ago. Revelation Road explains the events occurring on our darkening horizon and their Biblical significance. America's economic house-of-cards and political instability, the Rapture of the Church and the void created by its disappearance and the subsequent rise of a world religion. Experience the End Times and the perilous journey of the final generation through the eyes of the Thompson family.

Bill Salus has crafted a unique novel with a non-fiction biblical commentary that serves as an eye-opening herald call to all believers and non-believers alike!

Eric Barger discusses the state of the Middle-East past, present and future with author, radio host, and recognized authority on Bible prophecy and end-time events, Bill Salus.

Speaking of the current state of unrest in the Middle East, Salus and Barger encourage every Christian to become familiar with the prophetic Scriptures found in God's Word. Both men point out that the study of prophecy is not "doom and gloom" as many bemoan. Salus contends that its a gift from God and if we choose to ignore His prophetic blueprint, we'll not be prepared to minister salvation and hope to the lost in the troubled days ahead.

Bill Salus states that "there is a special reward for us to be courageous as we go through these times." Just as Joshua and Caleb were rewarded, so shall it be for the Saints who study God's Word and take seriously the call to prepare their hearts.

Included Topics Are:
- Implications of the Arab Spring
- The peril and rewards of witnessing in the last days
- Peace in the Middle-East?
- Will Israel ever be defeated in the last days?
- Is there a possibility that Israel will actually expand its borders in the future?
- In every instance, we study the Scripture for clues.

Don't miss this fascinating discussion of how current events are all forecast in God's guidebook - the Bible.

The discussion ends with a clear cut call to surrender to God and though trouble appears to lie ahead that the best is yet to come!

Order ALL THREE ITEMS together here for $45! (plus normal shipping)