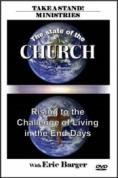 The State of the Church:
Rising to the Challenge of
Living in the End-Days

The State of the Church:
Rising to the Challenge of Living in the End-Days

Eric Barger lists and details many of the challenges facing the Church in 2014 including:

- Adversarial attacks from the secular world including the upswing in anti-Christian sentiment.

- Opposition from the religious and spiritual realm such as the Islamic agenda, the normalization of the Occult, proliferation of New Age thought, the rise of the cults, and the troubling counterfeit of postmodern “Christianity” and the Emergent Church.

- Eric focuses on what may be the two most urgent challenges: The Homosexual Agenda and the advancing Ecumenism blurring the lines between Roman Catholicism and biblical Christianity.