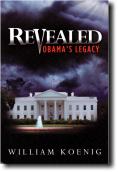 A Word From Eric Barger...
"Very few people fully understand the extensive consequences of President Obama’s two terms in office. Bill Koenig does. He was there, serving in the White House press corps, for every moment.


In Revealed: Obama’s Legacy, you'll find a detailed chronology tracking what history will remember as a failed and destructive presidency. Covered are topics from the careful shredding of the U.S. Constitution, to Obama's coordination of the LGBT agenda and his rise to become Israel's enemy and Islam’s apologist - looking the other way while Christians suffered in Iraq, Syria, and the entire middle east, the painful truth needs to be told.

As we attempt to reverse the past 8 years brazen evil, understanding the steps leading to the attempted destruction of America is vital. Can Christians repair the breach and if so, how? Those seeking answers will find Revealed: Obama’s Legacy an important resource in the days ahead.