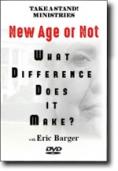 New Age or Not:
What Difference Does it Make?

New Age or Not: What Difference Does it Make?
Examining the Spiritual Life and Influences of
Hillary Clinton

Mrs. Clinton claims to be an “old fashioned Methodist” but who and what really dictates her spiritual beliefs?

What about the séances and ongoing necromancy?

Who is Michael Lerner and the Marxist philosophy of Tikkun Magazine?

Why Hillary will not reverse but rather increase Obama’s open-door policy on Islam and illegal aliens.

Unless the email server scandal proves to be her undoing, Hillary Clinton is still considered the odds on favorite to be elected President of the United States in November 2016. But does America really know what they are getting if they put her in the White House?

Eric Barger has chronicled the spiritual odyssey of Hillary Clinton since the early 1990's. Now, considering the race for President, the need to sound this alarm is greater than ever before.

Eric Barger states, “It would not matter if she were Democrat, Republican, or Independent. For the sake of our nation the spiritual practices that fuel Hillary Clinton must be known."

This 68 minute live DVD presentation contains information you, your family, and friends are not hearing in the major media. America needs to hear the inconvenient, eye-opening truth.