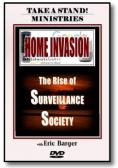 * WE ARE CURRENTLY TAKING
PRE-ORDERS for the DVDs.

ORDER THE DVDs NOW
to get special access and
begin watching the
production online
TODAY!

The Rise of
SURVEILLANCE SOCIETY

Over two years in the making, "Home Invasion: The Rise of Surveillance Society" represents hundreds of hours of research and production to uncover the facts about technology and those who control it.

In this video documentary, author and commentator Eric Barger examines the overwhelming rise of technology in relation to Bible prophecy in these last days. Outlined here are the godless and shocking effects of social media and big tech elitists as they purpose to effect and shape the ideologies of our world.

With security compromised, privacy fading, and free speech eroding, Eric documents the prophetic implications of how Christian and Conservative thought is targeted for suppression by leftists at Google, Facebook, Twitter, and other Internet giants.

Will the results of today’s tech advancements prove catastrophic as the world speeds toward the prophesied Antichrist and his world domination?

You may preorder this documentary (projected to include THREE DVDs along with two booklets).

When the production is finished you will receive the DVDs and booklets via mail.
(No release date is projected yet.)

As a special bonus, if you place your order now, you'll receive instant access to all completed video segments and both booklets!
* Booklets can be ordered separately.