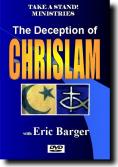 The Deception of Chrislam by Eric Barger

Today, there is a growing and increasingly widespread movement inside mainline and Evangelical churches which attempts to join Islam and Christianity. Based on the premise that both religions worship the same deity, "Chrislam" is gaining followers and becoming a favorite among the politically correct. But is the basis of this movement correct? Do the Bible and Qur'an harmonize? Is Allah actually Jehovah God? Why are those claiming to be Evangelicals involved with this misguided idea? Eric Barger answers these questions, debunks Chrislam's fallacies, and clearly points out the incompatibilities which forever separate authentic Christianity and Islam.