Burning Down The Shack 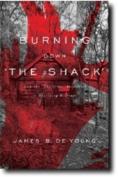 Burning Down The Shack
by Dr. James B. De Young

A Word From Eric Barger...

Jim De Young is a gift to the Church. He's a tireless defender of the faith and one with intimate, personal knowledge concerning the aberrant beliefs of Paul Young.

Jim has also been an inspiration to me and since first meeting him in 2008, I can say that we share the same passion for truth and for warning the Church about the beliefs and teaching of arguably the most popular Christian author in recent memory. Burning Down The Shack is a clear, documented resource sounding a much needed alarm in these days when discernment is lacking throughout the Church.

Inside Burning Down The Shack
Millions have bought into the theology of Paul Young, whose book The Shack portrays God as a loving, black woman. Similar changes in appearance were given to Jesus and the Holy Spirit. The story of pain and redemption then resonated with the public. But is Young's worldview important? Is his theology that big a deal? James De Young thinks so. In fact, it's so important that he's written a compelling challenge to The Shack. In Burning Down the Shack, De Young manages to shed important light on the implications of Young's pluralistic faith, and provides readers with a gripping counter-balance to the popular little volume that's spent many weeks on the best-seller lists. Exploring the nature and character of God, from Scripture, De Young concludes that it is necessary to proceed carefully with The Shack, lest important truths be skewed and even jettisoned. Without being confrontational, De Young makes the case that dangers can lurk under the foundation.