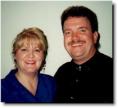 Once again, let me repeat: Islam's Allah is NOT Jehovah God!

Evangelical MELTDOWN
The march toward Global Religion starts with us?

Many readers may remember my article "I Can't Sign the Letter" which detailed a document produced by the Yale Divinity School and signed by many prominent "Evangelicals" entitled, “Loving God and Neighbor Together: A Christian Response to a Common Word Between us and You.” This ill-fated document was the attempt by what I would like to think are but some well-meaning but misguided Christians to respond to the call by 138 Muslim clerics to find common ground between the two religions.

As part of the continued effort by the Yale Divinity School's "Reconciliation Program," the university recently hosted an event called "Loving God and Neighbor in Word and Deed: Implications for Christians and Muslims." This was the first in the series of conferences slated for this year in the US, Britain and at the Vatican in Rome. The July meeting at Yale featured none other than Senator John Kerry as the keynote speaker. That strikes me as off the wall at best but Kerry's participation in the event though strange wasn't near as troubling as the continued capitulation by Christian leaders concerning Christian doctrine and historical truth.

Did you catch that? Volf and Blair are going to teach a course on faith and globalization. Allow me to translate. This means "all religions must agree as one so the One-Worlders can proceed with the New World Order." I believe that what Satan may be doing here is to try and breakdown the standards held by the two religions most apt to reject and oppose Antichrist when he comes. What better way than to start plowing up ground in an effort to get Christians to accept Islam - even if the Muslims silently reject the idea all along?

Muslim clerics know that from Muhammad's time until today Islam has always viewed each and every non-Muslim as "infidels" and members of the "House of War." It is, in Muslim tradition and doctrine, perfectly acceptable to deceive any and all infidels (non-Muslims) if it is for the furtherance of Islam. So, if a movement - suggested by Muslims - causes Christians, including those claiming to be "Evangelicals" such as Dr. Leith Anderson, Dr. Rick Warren and those who gullibly follow their ministries to accept Islam, its teachings, its culture, and most of all, its god then the obstacles for Antichrist are greatly depleted. In the near term, the instant result is that Islam is furthered and the cause of Christianity is the big loser. But as much as this is indeed for Antichrist's system to be working in the confines and cover of "unity" and "peace," the concern of this article is once again the premise that those at Yale are basing their very discussion on. Doesn't anybody up there get it? Their god is NOT our God!

Nevertheless, in the meeting at Yale (which concluded on July 31) was the aforementioned National Association of Evangelicals President, Leith Anderson, Robert Schuller and other high profile Christians who, under the supervision and leadership of the Yale Divinity School's "Reconciliation Program" chairman Joseph Cumming, met with Muslim clerics and in the end declared among other things that Christian should spend one week a year declaring and celebrating the good point of Islam! Excuse me...what good points? If their god (Allah) is not our God (Jehovah) and their religion (Islam) is worthless to save a sinner from eternal hell then what is there to discuss let alone extol?

We all want peace but if achieving it compromises biblical truth it is spiritual treason and that is exactly what I contend the signers of the first Yale document in November 2007 and last week's meeting are guilty of. These "evangelicals" are playing right into Satan's hand for they seek reconciliation with Muslims without biblical truth as their guide. This can only advance the cause of Islam and confuse and misinform countless Christians who are on the periphery. Unless talk about reconciliation and common ground centers around the Cross of Jesus Christ then there simply cannot be any agreement. That is not pretty...its not very tactful... its offensive to some who do not faithfully hold to the Holy Bible and its not what Satan wants but it is true. I encourage every one reading this to reject this silly and dangerous notion and to get this document and both "I Can't Sign the Letter" and "Their god is NOT Our God" into the hands of every pastor and church leader possible. I can just about guarantee that the National Association of Evangelicals, Rick Warren, Schuller and others are going to distribute and fund the dissemination of information to the contrary.

These are troubled times and with "Evangelicals" becoming more accepting of universalistic ideas we can simply expect the dividing line separating those who seek and follow God's changeless truth and those who are only pretenders to become more and more pronounced and also more of a battle zone. We need to fast and pray for some of the high profile professed Christians to come to their senses and realize that their unbiblical ideas are dangerous lest we all awake to the Muslim call to prayer being broadcast five times each day from speakers atop buildings which once served as local churches across America.

My friend and co-laborer in defending the faith, Jan Markell said it well: "...the Muslims are laughing all the way to Mecca." (Read Jan's commentary here)

Below are a few pictures portraying suggesting the response to Muslim "compromise" and "reconciliation" in London. Remember: Yale's compromise doesn't weaken their message - just ours - while souls perish without Jesus. 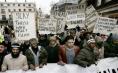 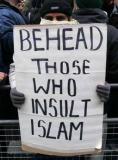 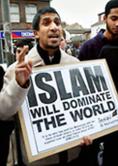 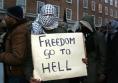 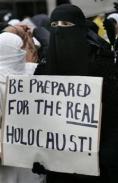 "Take A Stand! Ministries exists to see the lost saved and the Church changed by the power of God!"

Make a Monthly Pledge to Take A Stand!

After all that lousy news YOUR HAVE GOT TO READ THIS!

Since watching his performance - and hearing him testify to the power of Jesus Christ at this year's MLB All-Star Game Home Run Derby - I have been thrilled to tears by the story of Josh Hamilton. You will be too. 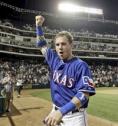 SPECIAL "One of Everything" OFFER

We urgently need your financial help this Summer. In return for your support we want to bless you with materials to help you and others to "Take A Stand!"

Take A Stand! Seminars are Changing Lives Every Week!

Email us here today to schedule your church or community.