Though many good people have bought into it, read why Baptists Albert Mohler and Richard Land - and a bunch of other Bible-believers (including me) won't be signing this ill advised and incomplete document.

Albert Mohler on "An Evangelical Manifesto"

Richard Land on "An Evangelical Manifesto"

Though largely ignored by the mainstream media (imagine that?), this is the most overwhelming and significant document ever released on the subject. The problem is that unless a person is spouting the party line on the issue (which is to blame man and thus force mankind to accept responsibility for warming) you get either negative media coverage or just a black out of any mention.

In an interview, Dr. Arthur B. Robinson, president of the Oregon Institute of Science and Medicine and the author of the petition stated that even if there is a rise in green house gasses such as carbon dioxide that this is in fact a positive thing for the planet since such gases help plant life to flourish. Robinson commented, "this is something the Global Warming fanatics consistently ignore." Dr. Robinson was also asked if he or his colleagues would debate Al Gore and the other man-causes-warming fanatics. His reply was, "anywhere, anytime, anyplace." He noted though that his opponents will never debate him because they don't want their ideas to be tested or exposed for what they are. I should note as well that Dr. Robinson is staunchly opposed to Darwinian theory (evolution) and is known to be a strong Christian. (Chalk one up for the good guys...)

The global warming fanatics who wish to curb, cap and limit our use of the planet's resources need to be exposed for the frauds they are. Its not that I am lobbying against conservation but the globalist thinkers at the UN who have bought and paid for the erroneous man-causes-warming hysteria are only after one thing and its not a reduction in green house gases but rather CONTROL over the people through a hoax that they say is set to destroy us unless we surrender our future into their crafty and more trustworthy hands.

They truth is that when the UN one-worlders realized that trying to scare the world into submission with the the alleged hole in the ozone which was sure to be our demise they merely found a new pony to ride in attempting to secure a slow but sure control over any nation and every nation if possible. Ask yourself, when was the last time anyone droned on and on on the Charlie Rose Show or Larry King Live about ozone depletion? Why? Because truthful scientists finally made it common knowledge that the ozone is not going away and that any depletion is a natural effect of nature that has nothing to do with mankind and all of our internal combustion engines. The same will be the case concerning global warming. I just pray that horrendous treaties like Kyoto (Japan) 1997 never make it past our Congress and President. Considering the tone of Washington (DC) these days every worst fear of freedom loving people in America could be realized after the coming November elections.

In the mean time its pray, pray, pray and throw in a hearty "well done" to Dr. Robinson and his 31,000 friends. They have agreed with the Bible's position on global warming and that is that God is in complete command and control and that human's are not about to destroy what only Jehovah can bring down!

More than fifteen years ago, Eric Barger was declaring the same thing that honest scientists like Dr. Robinson are today!
Click the frame below to see a short clip from "The New World Order and the Environment or...How to Rule the World Through Fear" recorded in 1993 in Winnipeg, Canada.

Get your copy of Eric's classic message on DVD by clicking here.

The Proof and the Power of the Resurrection - Eric Barger, live seminar presentation

Out of Mormonism - Ed Decker's story

Report on Emerging Leader Brian McLaren's "Everything Must Change" Conference

Eric Barger and I attended the “Everything Must Change” conference in Nampa, Idaho, February 7-9, 2008. Eric oversees “Take A Stand Ministries” and travels about two hundred days per year educating the church on cults, Islam, spiritual warfare, etc. Our interest in this conference was Brian McLaren, a leader in the emerging church movement. Both Eric and I shared a desire to hear McLaren for ourselves and formulate our opinions from personal experience rather than just his writings or other media. 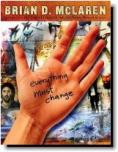 The conference was held and hosted by Northwest Nazarene University. I’ll explain more about my fascination with this partnership a little later.

From this point on, I’ll write about my own personal experience with some references to Eric. I encourage you to read Eric’s report when he makes it available on his website (www.ericbarger.com).

My Introduction to Brian McLaren

I first heard of Brian McLaren through friends who had concerns about his materials being used in their churches. They asked if I knew anything about him or the movement he was promoting. I had heard of the movement but knew nothing of McLaren. After a little checking he seemed like a nice guy with a strange bent; sort of the ‘60’s all over again but with a sophisticated twist. The opportunity came to hear him personally so I went to the conference.

We're going to once again extend our offer of CDs.

Please click the links below to take advantage of this offer by using our secured online bookstore.

For a gift of $25 we'll send THREE different CDs ! (Add to Shopping Basket)

For a gift of $50 we'll send SIX different CDs !! (Add to Shopping Basket)

For a gift of $100 we'll send SIXTEEN different CDs !!! (Add to Shopping Basket)

For those who want to go the extra mile in helping us...

Great things are happening through the seminar ministry!

PLEASE ALERT US IF YOUR EMAIL ADDRESS CHANGES. Click Here